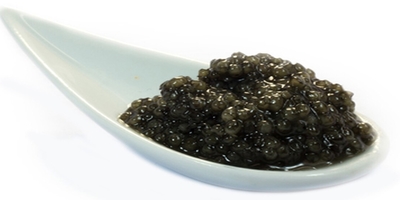 Back to the Category page

Sevruga is the smallest of the caviar-producing sturgeons. It can grow as far as 70 kg. in weight and 2 meter in length. It is native to the Black, Azov, Caspian and Aegean Sea basins.

Because the Stellate sturgeon was once the most common and fastest to reproduce, this made Sevruga caviar the most commonly found of the sturgeon caviars, and the most inexpensive of the three main types of sturgeon caviar – Beluga, Osetra and Sevruga. It’s calculated that about half the caviar production comes from Sevruga. Sevruga caviar eggs are a pearlescent grey, and smaller in size than other sturgeon. The flavor is more rich than other varieties, often described as saltier, but it can vary depending on the origin of the fish.

Other types of Sevruga

A rare type of caviar known as Imperial Caviar, from the Sterlet sturgeon (Acipenser ruthenus), a now nearly extinct species of sturgeon from the Caspian Sea is sometimes incorrectly labeled as Sevruga, as well as the even rarer Golden Caviar from the albino Sterlet, the caviar being yellow in color.

Sevruga is farmed in the waters of the Caspian and the Black Seas in order to impart to you this most sophisticated selection.

It is harvested from, which is a small and trim fish in comparison to its larger relatives, such as Beluga or Osetra from the Sturgeon family. Although with smaller and darker grains than Siberian Ocietra, this Sevruga caviar has an intense flavor with a caramel touch and a slight oiliness, with fine grains of a dark slate-grey color, as its pieces are much smaller than the pieces of other sturgeon kinds.

The taste of Sevruga caviar varies depending on the origin of the fish. In many cases, it will be stronger and saltier than beluga and ossetra caviar. As mentioned above, the eggs are quite small compared to those of Beluga and Ossetra caviar.

Several attempts have been made to farm the Sevruga sturgeon and varying degrees of success has been achieved. Experiments have for instance taken place in Iran, Russia, Italy and the USA.

The oldest known Sevruga sturgeon was 27 years of age.

As mentioned above, the Sevruga sturgeon is a comparatively small species of sturgeon. It is slim-bodied; with the longest specimens being about 220 cm in length and weighing around 80 kg.

The Sevruga sturgeon can be easily recognized on its long, thin and straight snout.

The body is of a dark grayish-green or brown color, with a pale underside and pale scales on the lateral line.

Sevruga caviar is the finest and most prestigious food in the world! Very aromatic, very savory, mellow, rich taste gloriously imparting the flavor of the sea. It is bursting with flavor exploding your mouth Sublime! This caviar will add a note of exclusivity and sophistication to any table and therefore will make a wonderful addition to the menu of any high-end restaurant or a bar!

Our Caviar is organically grown and does not contain Pesticides, added Hormones or Antibiotics

It contains Omega 3, Vitamin A, B12, E, Calcium, Selenium and Iron which helps to promote strong bones, teeth and a healthy immune system.

Elegant buttery finish that rests long on your palate

champagne brut or Blanc de Blanc (dry white sparkling wine) Suggested use: Sevruga caviar is a real treat for caviar connoisseurs. Small-medium pearlescent beads have a distinct taste that is only characteristic to this type. Sevruga is most commonly requested by those familiar with the category and the product. Because of its high price, Sevruga caviar can be suggested as an aperitif for a small group or an exclusive event for a few select guests. It is an excellent choice for a high-end restaurant or wine bar.

Sevruga caviar is traditionally graded by size and color. The larger and lighter the grains, the more valuable the caviar. Also, due to the limited availability of true Sevruga (Acipenser Stellatus), caviar obtained from Sterlet (Acipenser Ruthenus) is incorrectly marketed and sold as Sevruga or as its substitute. Mis-labeling is illegal and a rampant practice. The difference between the two is that of the species, therefore there will be a significant difference in taste, texture, color and price. Lower grades of Sevruga and Sterlet caviar are reminiscent of one another however both Sevruga and Sterlet will never produce golden shades of caviar. So, be aware when purchasing “golden Sevruga or Sterlet”.

Sevruga is one of the sturgeon family’s most amply represented members in the world’s supply of caviar. Next to the imposing proportions of its larger relatives, such as Osetra or Beluga, this fish is rather small, reaching up to 2 m in length and weighing up to 80 kg. The Sevruga sturgeon’s slender form is emphasized by a long and narrow snout with five small, moustache-like barbels near the mouth. Sevruga is not so long-lived as Osetra, Beluga or Kaluga. Its shorter lifespan – up to 25 years – is in fact one of its advantages, as it is accompanied by a correspondingly short maturation period and increased rate of reproduction. In the wild, this fish lives in the basins of the Caspian, Azov, Black, and Aegean Seas and adjacent large rivers.

Due to its faster reproduction and wider geographic span, Sevruga is one of the best represented members of the sturgeon family, not only in aquaculture but also in its natural environment. It supplies more than half of all sturgeon caviar to pass through the international market. This abundance allows it to be by far the least costly among the great caviar-yielding sturgeons. Though it is less expensive than Beluga and Osetra, its relatives, Sevruga caviar delivers the same high quality, beautiful appearance, and delicate flavor expected from these elite species.

This sturgeon species produces small, delightfully crunchy roe with a marked buttery savor. The color of the beads varies from catch to catch and from fish to fish, ranging from light gray to greenish and yellow-gray.

Marky’s Gourmet Store is proud to offer you just a few varieties of Sevruga caviar:

Marky’s Sevruga Caviar  is often called an “entry level” caviar for newcomers to this famous delicacy. Do not be misled by the small size of Sevruga caviar’s grains; as is so often the case, some of the best things come in small packages. These small beads hold a flavorful, juicy secret, a taste stronger than that of all other caviars. This caviar has a distinct silky and buttery flavor ending on a sweet ocean note. The grains are deep gray in color, with a crunchy texture, easily separated from one another.

Classic Grey Sevruga Caviar is a favorite of those seeking the highest standard of quality without going to tremendous expense. It has a distinctive smooth and buttery flavor with a long, subtle aftertaste. The grains are small with a pearlescent gray envelope that conceals their succulent contents. 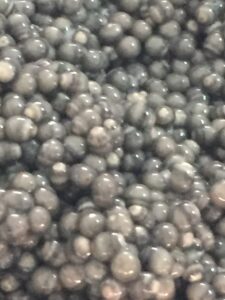 you will find all news about caviar & grades 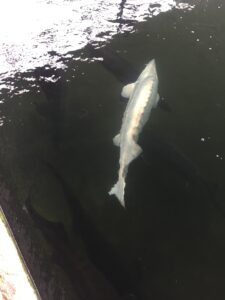